I heard about this controversial book as a teenager. Being a precocious reader, I asked my mother what this book was about. She reluctantly answered it was about an older guy falling in love with a young girl, because she reminds him of his childhood love. Although she didn’t mention the eroticism, it was pretty obvious from her tone of voice that there was something wrong about the book in her opinion. I forgot about it until I read Azar Nafisi’s “Reading Lolita In Tehran” and her interesting comparison between Humbert and the Islamic Republic captivating female youth. Azar’s review of the book was indeed very intriguing and I decided to watch the old Lolita movie,which I wasn’t crazy about.

Only after I listened to the unabridged audio book, read skillfully by Jeremy Irons, I realized what the fuss was about. The literary genius of this book is all based on the first person unreliable narrator, which is not possible to replicate in a movie. (An unreliable narrator is a narrator, whose credibility has been seriously compromised). Lolita’s narrator, Humbert Humbert, fascinates the reader with the intensity of his obsession and appalls her with great lengths he goes to satisfy it.

Humbert never tries to justify his crime. He informs us early on that he is a pedophile and he is only interested in a very specific female age range and characteristics, called “Nymphets”. “Between the age limits of nine and fourteen there occur maidens who, to certain bewitched travelers, twice or many times older than they, reveal their true nature which is not human, but nymphic (that is, demoniac); and these chosen creatures I propose to designate as ‘nymphets. It will be marked that I substitute time terms for spatial ones. In fact, I would have the reader see ‘nine’ and ‘fourteen’ as the boundaries—the mirrory beaches and rosy rocks—of an enchanted island haunted by those nymphets of mine and surrounded by a vast, misty sea.”

All his life, he hasn’t  dared getting close to a real nymphet, because he is completely aware of its immorality and criminal consequences. The “Long hairy hand of fate” however, brings him to the house of a widower and her 12-year-old daughter. In less than 3 months, the woman falls for him, marries him while Humbert creeps around the house watching and falling for the daughter, Dolores. While Lolita is in summer camp, her mother dies in an accident, and leaves the predator free to hunt down the prey. He picks her up from the summer camp and takes her on a year-long road trip around the US. His initial intention was to just drug her every night and fondle her in her sleep, but the very first night they are alone together, playful Lolita “seduces” him, by trying to play with him the sex games she had played with a young boy at the summer camp, which leads to Hum “Letting her have her way” but doing what he wants to her as well. “I’m trying to describe these things not to relive in my present boundless misery, but to sort out the portion of hell and the portion of heaven in that strange awful maddening world, nymphet love.The beastly and beautiful merged at one point, and it is that border line I would like to fix, and I feel I failed to do so utterly. Why?”

And then follows a year Lolita being his orphan prostitute, having nowhere else to go. Humbert doesn’t tell the story as simple, of course. The year is described in intervals of Humbert’s mad love for Lolita’s beauty and her ways, followed by his frustration at her selfishness and their endless moves from town to town to remain inconspicuous. His beautiful words of adoration are intercepted once in a while with the reality of Lolita’s misery. She sobs every night, after Humbert feigns sleep. She collects change that she earns in exchange for her “non-basic” performances and hides them in cracks of the walls and books, which Humbert always finds. These rare clues are given in a matter of fact fashion, in the first 90% of the book, (before he loses Lolita) deceiving us into seeing her from his point of view. Only in the last chapter, overcome by grief and depression, Humbert confesses to the deeper damage he has caused to the child.

I think the absence of Lolita’s voice throughout the story is brilliant, because it relies on readers intelligence and conscience to hate Humbert before he gets miserable and remorseful himself. It is easy to judge a thick stupid rapist as criminal, but a witty criminal who does magic with word play? Not so much. You want to save an ounce of compassion for him to keep on reading his weird love story. Then you reflect on your feelings toward him and you feel guilty, because he is horrible. This is how smart Nabokov is and how good at language. And English is not even his native tongue!
Advertisement 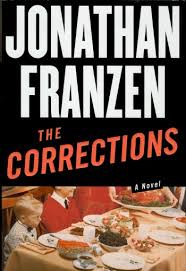 The book is about a dysfunctional family from the imaginary town of St. Jude somewhere in the Midwest.

The story starts with the account of the parents, Enid and Alfred Lambert living their seemingly uneventful retired life. The lucid and life-loving Enid is concerned by her husband’s rapid downfall to dementia and Parkinson, trying in vain to interest him in life. Alfred who has always been emotionally unavailable to his wife, has worked for a Midwestern railroad company for decades, has made bad investment decisions due to his strict work ethics and loyalty to the company. Enid is ashamed that they have lost so many opportunities to be rich.

Then we hear about Chip, the middle child whose story shakes us up with its tragic and hilarious turns. Chip has taken a drug called “Mexican A” which makes its user incapable of feeling shame. The result of giving in to this magical drug is a 3 day long sexual relationship with his student, followed by his unemployment, and further failures. We learn all of these through flashback, while Chip is hiding a stolen salmon fillet in his jacket, hoping to cook a decent meal for his parents, who are stopping by his apartment on their way to a cruise trip. After getting dumped by his girlfriend on the same day, he meets the girlfriend’s husband, a Lithuanian politician and gets hired by him and flies out to Lithuania.

I am not going to give away all the other amazing plot twists of the novel, but they kept me awake at night. The writing is so smooth and amazing that all the bizarre events are totally believable. Characters are so real and dear that you feel like you have known them for ages. Franzen has done a fantastic job in writing Alfred’s paranoia and Enid’s relentless determination for a last family Christmas, making your heart overflow with love for them.

This is a very humane novel, in my opinion. Shame is the major affliction of the Lambert family, making Enid so judgmental and Alfred so angry. It is the reason for Denise’s crazy love experiments and Gary’s loneliness in his perfect family. And only through reunion and confessions of love and guilt to each-other, at least some of the Lamberts can find redemptions.

My brief rationalization doesn’t do justice to this beautiful book. Just read it if you like complex characters and intimate narrative.