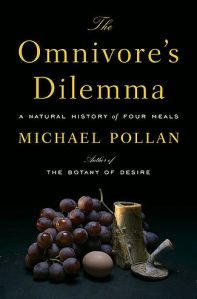 I think of myself as an Omnivore, both physically and intellectually. I eat a bowl of salad as passionately as I chew a crispy bacon, and I like to hear the arguments about feeding billions as much as those of animal rights. That being said, this book was perfect for my food choice dilemma.

The author structures the book into four main food chains, each of which he personally explores from start to end:

In this blog I am going to mainly summarize 1-3, since those are the practical ways that most of us can feed ourselves.

The backbone of the industrial food chain in the US is undoubtedly the industrial corn. Fifty percent of an average Americans human biomass, can be traced to corn consumption. We know this thanks to corn’s unique carbon signature. This is much higher than an average Mexican. See below other fun facts about corn. 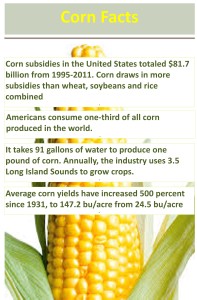 But is there anything wrong with this? Isn’t Corn is delicious and nutritious? The author first addresses the question of how corn became so dominant in the US and along the way we understand how this domination affects us, on an individual and global level. There are a few biological advantages of the corn crop that makes it superior to other grains in terms of quick and easy yield, but the US surplus of corn really started after the introduction of Nitrogen-based fertilizers in 1920s. This type of fertilizer is a product of petroleum and was the force behind the “Green Revolution”, which saved millions from starvation around the world. By 1930s there was so much corn surplus in the US that the price of corn plummeted to its lowest, and the Government had to step in and save the farmers from bankruptcy. I tried to illustrate the timeline of politic and economic ups and downs of corn production in an infograph. Long story short, the Government was supporting the farmers in the beginning, but later in the century when bigger players like food processing companies started lobbying, regulations shifted to support them instead of farmers. As a result, corn production increased drastically and corn market prices decreased, making it the most efficient commodity food for the food industries to make money off of.

Along the way small farmers were forced to convert their diverse-crop farms to huge corn/soy farms and their grass-based animal farms to CAFOs(Concentrated Animal Feeding Operations) that feeds the cattle with corn. Here is a diagram of what the whole chain works.

Pollan actually bought a calf and followed it through his short life from the first few months of happy grass eating with his mom, to his stinky CAFO period. But what’s so wrong about a CAFO?

In this chapter, the author digs into the Organic food in its current grocery store distribution. Starting his journey in a whole Foods supermarket and reading Organic stories on labels, to some of the biggest suppliers of these organic products in California. Pollan argues that the perception given by the Organic food’s marketing is deceptive. A lot of Whole Foods customers imagine a utopia in which they live in perfect harmony with numerous small farms and happy animals. The reality is that Organic farming regulations don’t enforce that utopia. In fact, Whole Foods buys from a handful of organic mega farmers. True, those farms substitute chemical fertilizer and pesticides with organic compost which is much less harmful to the land and the consumer. But it does have other ecological disadvantages. Large organic farms need constant tilling and weeding, which releases a great amount of nitrogen to the air and requiring large amounts of compost, needed to be shipped in tons from overseas and cross-country.

As to organic animals, government organic regulations don’t mandate cattle to be raised outside Cafos or eat grass. As long as a cow eats “Organically farmed corn”, its meat and milk is considered Organic. The worst part is the origin of “Free Range” eggs and organic chicken meat. Those chickens live a very similar life to their non-organic industrial farm chickens. The “Free Range” means that in their CAFO, they have a narrow door leading to a small grassy yard, which stays shut for the first 6 weeks of the chicken’s life and they are slaughtered 2 weeks after it opens. None of them practice this freedom, after 6 weeks of confinement.

Here is a summary of the industrial Organic food advantages and disadvantages:

Beyond Organic is the food chain that the author next explores and finds the most healthy and sustainable. As a successful model, he explores the Polyface farm  in Virginia’s Shenandoah Valley, managed by Joel Salatin, . 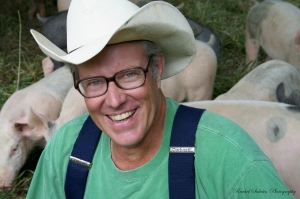 Joel calls his agricultural method “Grass farming”, utilizing the latest scientific methods to grow, rotate and graze grass, creating a full ecological circle within his  productive farm. The circle starts with grass, feeds a variety of animals and ends as compost that feeds the same pasture of grass. 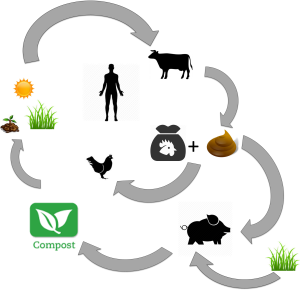 The cows only feed on grass and hay(in winter). The chickens get a large part of their food from eating grass and the worms from the cow manure, sanitizing the pasture. The pigs are used as the farm’s compost machine as described by Joel:” When we feed hay to the cows, they eat and lounge in a pole shed that we bed down with wood chips, sawdust, and old hay to absorb the excrement. This bedding ferments in the anaerobic conditions created by the heavy cows walking on it. Added corn ferments and offers a tasty salary for pigs to aerate the bedding–hence PIGAERATOR. The oxygenation turns the entire deep bedding into a compost pile, which is the backbone of the farm’s fertility program. During the summer and fall, the pigs are in special savannah pastures rotated every few days with electric fence.”

Ok, we may argue that the above mentioned farm output is mainly animals products and a lot of energy is wasted when we eat an animal, instead of a plant. But if all that energy is from the sun, “That meal comes as close as it can get to a free lunch.” And instead of diminishing the soil it enriches it.

Sustainability of Polyface farm doesn’t stop at production. The farm doesn’t ship food long distance. They distribute their products locally to nearby restaurants, farmers markets and direct to consumers at the farm or online “Metropolitan buying club”.  In Joel’s view this is a start of a movement that can reform food economy, with consumers who are willing to go into trouble and expense of buying from farmers they know.

I actually tried to buy our meat and eggs for a month from a farm rather than a store. It cost about 20% higher. Sounds a lot? Well, for us it translates to maximum $40 per month. That amounts to one happy hour for two, a movie night with popcorn, or a pair of pants.  And if that means more nutritious food, helping local farmers and healing our environment I am more than happy to pay that premium.

3 thoughts on “The Omnivore’s Dilemma”