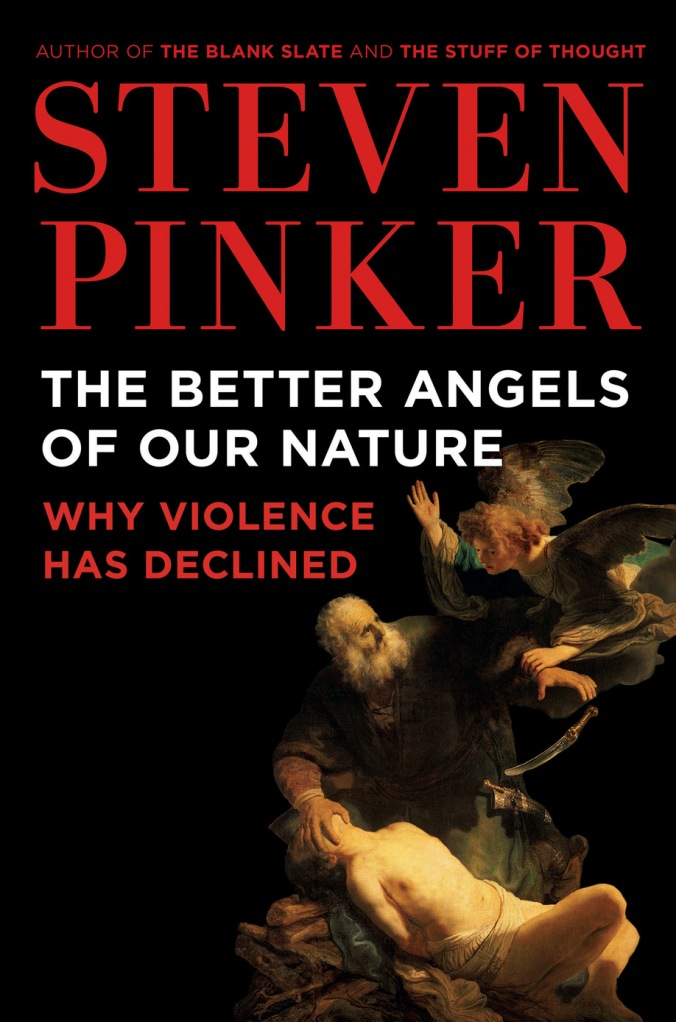 Many years ago in Iran, my friends and I were discussing an interesting subject. Has mankind really improved over the course of history? Our discussion quickly evolved into the evolution of violence as the biggest threat to our well-being. I had a gut feeling that as an Iranian woman I was definitely better off living in the 21st century under the rule of Islamic Republic, than living as a peasant wife or daughter in the 12th century. I thought it was less likely for me to be killed, beaten or raped in my current state and time. Most of my friends didn’t share this view and thought I was underestimating the threat of modern warfare, crime and terrorism.

Imagine my delight when I  read this  book by Steven Pinker and recommended by Bill Gates, in which he demonstrates the decline of violence through scientific analysis and statistics. From chimps behavior to the great wars of our recent history,  I enjoyed  finding answers to my questions from this well-structured extensive account of human violence.

This book is long(800 pages), as the subject demands, but well worth reading for anyone interested in social science and humanity. I’ve listed a selection of my favorite parts below as well as the book’s outline so you can get an idea.

A selection of my favorite learnings:

Pinker explains the moral rationale behind the horrible tortures of the Inquisition. “If you really believe that failing to accept Jesus as one’s savior is a ticket to fiery damnation, then torturing a person until he acknowledges this truth, is doing him the biggest favor of his life.

But why don’t modern fervent Christians practice the same kind of violence and call for burning heretics? Their holy texts to which they express unconditional loyalty imply that it would serve the greater good. “The answer is that the people in the west compartmentalize their religious ideology. When they affirm their faith in houses of worship, they profess the faiths that have barely changed in 2000 years, but when it comes to their actions, they respect modern norms of nonviolence and tolerance. A benevolent hypocrisy for which we should all be grateful.”

The problem with Islamic version however is that majority of Muslims are still confused about this. In practice, the majority has  banished those customs advised by the holy book 1,400 years ago. They don’t own slave concubines or cut one’s hand for stealing, but they can’t let go of the idea that Sharia law should rule the society, which leads to the emergence of “True Caliphates” like Isis.

Imagine you live in a farm that has the main source of water in the area. Your neighbor doesn’t have a water source, but owns a small patch of forest that can be a great source of fuel. You  fear that the neighbor is going to initiate an attack to acquire your resource and so does he. That inclines you to eliminate him by a preemptive strike and so does he, even if you are both very peaceful people. How to avoid such dilemma?

“The most obvious way is through a “policy of deterrence”: a) Don’t strike first b)Be strong enough to survive the first strike c)Retaliate against any aggressor in kind”.

” The key to the deterrence policy though is the credibility of the threat that you will retaliate. If your adversary suspects that you are going to be wiped out in the first strike, he has no fear of retaliation. And if he thinks that once attacked you would rationally hold back from retaliation, because at that point it’s too late to do any good, he might exploit that rationality and attack you with impunity.”

In 1993 crime in New York City and the rest of the US dropped by 45%, and has stayed low ever since.What changed? Not poverty and racism.

Five “historical forces” that have driven the decline of violence: